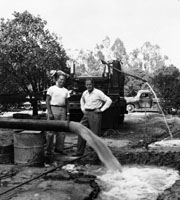 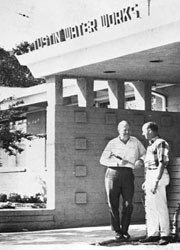 PAIR OF WINNERS at Chamber of Commerce installation dinner-dance June 29 at Tennis Club were Earl Rowenhorst, Man of the Year; and Margaret Pottenger, Woman of the Year, of The Jabberwocky, girls’ and young ladies’ apparel store.

Rowenhorst’ s honor was announced by William A. Moses II, chairman of this year’s Man of the Year committee on behalf of the group. He recounted the various activities Rowenhorst had carried on to the benefit of the Tustin school districts and Tustin City in the annexation line.

Miss Pottenger, like Rowenhorst a former chamber director and hard worker for Tustin area over the past decade, was chosen by the Man of the Year committee for her outstanding contributions in civic work. Traditionally, former men of the year for this area meet at chamber direction to choose secretly the person to be honored. With Miss Pottenger’s selection, it was noted, a new category is now open for future honors of women active in Tustin area civic endeavor.. Among others introduced at the meeting were Fred Waitman, new Tustin Chamber secretary – manager, Mrs. Waitman and his aide, Liz.

On Sunday morning, August 9, 2015, at the age of 93, Earl “the Pearl” Rowenhorst was called to his eternal home in heaven. Born on July 13, 1922 in Marion, South Dakota to Chris and Everena Rowenhorst, Earl grew up on the farm with his eight brothers and sisters, one of whom, Gladys Wieman, is still living there at the age of 98. After leaving South Dakota, Earl proudly served in the Army in World War II under General MacArthur in the Philippines, and was awarded two Bronze Stars and the Purple Heart.

Once Earl returned home, he settled in Southern California and went to work for the Tustin Water Works in 1946 as assistant to Walter Rawlings to help manage the 700 services in place at the time. He continued working for the privately-owned company for 34 years until 1980 when the City of Tustin took over. He continued as water service manager until 1987 when he retired.

Earl was a life member of the American Water Works Association and he was instrumental in the development of Tustin’s water system. In 1961, he was part of a group of Tustin men that formed Tustin Savings and Loan. He was named Tustin Man of the Year in 1966, and he also served on the board of directors for the East Orange County Water District.

Earl also enjoyed spending time in the San Joaquin Valley where he grew oranges on “the ranch,” and spent time with his sister Edna Veeh’s family. In recent years, Earl enjoyed spending time in Palm Desert, loving the warm weather. His health was good until the past few years. When he finally declined, he was comfortable at home where he wanted to be, with the loving care of St. Joseph Hospice, his wonderful caregivers, and his family. Earl “the Pearl” was a Christian and a true family man – in our opinion the best husband, dad, grandpa and great-grandpa a man could be.