You are here: Home / 1966 Tustin Woman of the Year – Margaret Pottenger 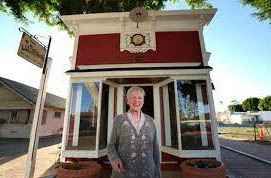 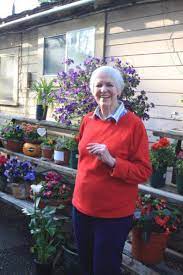 PAIR OF WINNERS at Chamber of Commerce installation dinner-dance June 29 at Tennis Club were Earl Rowenhorst, Man of the Year; and Margaret Pottenger, Woman of the Year, of The Jabberwocky, girls’ and young ladies’ apparel store.

Rowenhorst’ s honor was announced by William A. Moses II, chairman of this year’s Man of the Year committee on behalf of the group. He recounted the various activities Rowenhorst had carried on to the benefit of the Tustin school districts and Tustin City in the annexation line.

Miss Pottenger, like Rowenhorst a former chamber director and hard worker for Tustin area over the past decade, was chosen by the Man of the Year committee for her outstanding contributions in civic work. Traditionally, former men of the year for this area meet at chamber direction to choose secretly the person
to be honored. With Miss Pottenger’s selection, it was noted, a new category is now open for future honors of women active in Tustin area civic endeavor.. Among others introduced at the meeting were Fred Waitman, new Tustin Chamber secretary – manager, Mrs. Waitman and his aide, Liz