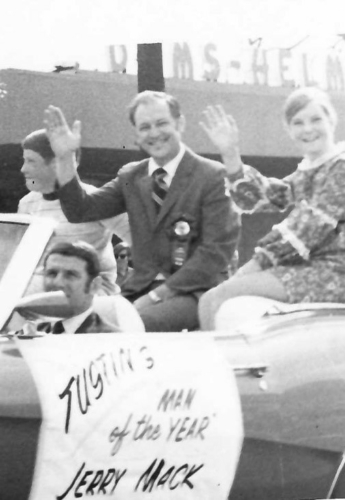 Kenosha, Wisconsin native Gerald Mack settled in Tustin after serving with the United States Marine Corps in El Toro. In July 1953, he married Tustin High graduate Joan Farnsworth at the Tustin Presbyterian Church. The family made their home at 14652 Pacific Street where they raised their three children Dennis, David, and Jill.

Gerald was a watchmaker at Farnsworth Jewelers and later an insurance agent with Tustin based Volunteer Life Insurance Company. He was active with the Tustin Tiller Days Committee, Boy Scouts of America, Tustin Boys Club, Toastmasters and the Tustin Young Republicans. He had leadership roles with The Tustin Jaycees, the Tustin Chamber of Commerce, and the Republican Central Committee.

He was elected to the Tustin City Council in 1960 and served on the Council for almost 10 years, including 4 years as the Mayor of Tustin.

He was selected as the 1968 Tustin Man of the Year by the Tustin Chamber of Commerce. He currently resides in Corona del Mar, California.