You are here: Home / 1970 Tustin Woman of the Year – Ida Freeman Thorman McCalla 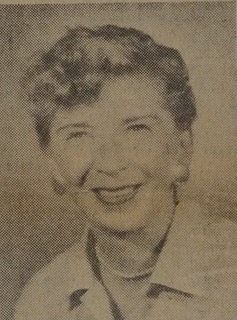 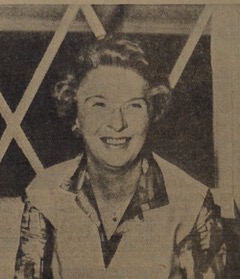 Ida McCalla, part of a true Tustin pioneer family, was born on April 6, 1907, in the city of Tustin. Her parents, Albert and Maude Thorman, had married in Pomona, CA in 1903 and in the following year, moved into a home on a 12-acre orange grove in Tustin on 6th Street. Ida was a member of the first class who attended all four years of then newly built Tustin High School, from 1921-1925. She attended USC in the School of Music.

At age 21, she married James Alexander McCalla, whom she had met at Tustin Presbyterian Church almost four years prior. They made their home on Prospect Avenue on land that is now Columbus Tustin Park. After raising their three sons, Bob, Bud (Charles), and Bill, she began to get actively involved in the City of Tustin.

She served as President of the Tustin Area Woman’s Club (TAWC) from 1961-62 and was the Orange District Federated Women’s Club President in 1967 and 1968. She was a charter member in Tustin’s Women in Chamber of Commerce group, then called The Well-Wishers. In 1970, she was selected as Tustin’s Woman of the Year for her leadership and volunteer activities.

Other accomplishments include being an associate member of the Children’s Hospital of Orange County and a member of the board of directors for Providence Speech and Hearing Center. In addition, she was well-loved for playing piano for Tustin Presbyterian Church from 1919 until 1969. She lived a very full life, passing away at age 98 on December 20, 2005.