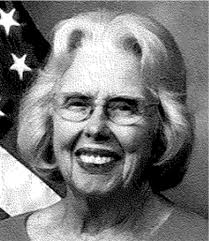 From the OC Register
Engine for preservation

November 1, 1929 – November 4, 2017 Vivien was born in Los Angeles, attended North Hollywood High, met and married fellow UCLA alumni husband Charles on February 2, 1951, and held an Elementary Teaching Credential.
They moved to North Tustin in 1957. Vivien was always involved in the activities and organizations of her 2 children and community when not substitute teaching. She joined the Tustin Area Women’s Club in 1959 where she held many positions and served as President from 1979-1980. She enjoyed being active with TAWC. She was an Alpha Xi Delta Sorority Order of the Pearl and a member of the Central O.C. Panhellenic.

In 1973, Vivien joined forces to create a celebration for the upcoming U.S. Bicentennial; from that came the combined efforts of helping to found the Tustin Museum and Tustin Area Historical Society. She was an active member and loved being a docent. She was recognized in 1976 as a Tustin Woman of the Year for her efforts. Vivien and Charley joined the Orange County Wine Society in 1978. They were active in all areas of the organization. From creating displays, selling wine at the OC Fair and being Courtyard Ambassadors where she would happily share her stories and knowledge of the many wines and wineries she had visited. Vivien served on the Orange County Grand Jury from 1984-85. Her volunteering expanded to the Past Grand Jurors Association, and an appointment to the Municipal Water District of OC. In 1989, she was appointed to the Orange County Public Cemetery Board of Trustees. In 2015, she was awarded the Trustee of the Year.

Vivien was always ready to go. Whether it had been hiking with the Sierra Club, going to UCLA football games and a few wineries, off on a cruise, or to her TAWC books group, she loved it all. She always had something to share – her
jam, a ready invitation to others, and a smile. Vivien happily celebrated her 88th birthday on November 1st and passed away suddenly 3 days later. She had a full calendar planned, and was still working her crossword puzzle. She will be missed. She is survived by her husband Charley of 66 years; her daughter, Janet Peal and spouse Paul, and their 2 children: Erik Peal and wife Danielle and their twins, Eathan and Charlette, and Megan Peal Spraker and husband Robert, and their two daughters, Sierra and Michaela; her son, Jack Owen and wife Sheila and their 4 children, Kelsey, Caitlin, Charles, and Genna Owen. She was very proud of all her grandchildren. Grandma Viv had been so excited to watch the growth of the newest generation to her family, her 4 great grandchildren. She is also survived by her brother, Creighton Webb and his extended family.
Services for Vivien will be Thursday, November 30, 2017 at St. Paul’s Episcopal Church, 1221 Wass Street, Tustin, CA at 10:00am. Reception immediately following in the Parish Hall.