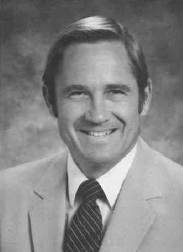 Dr. Ross worked in education for nearly 45 years and served as TUSD superintendent for 13 years from 1977-78 to 1989-90.Â Due to his leadership, test scores went up, facilities needs were addressed, a comprehensive curriculum development was in place and new programs addressed the changing ethnicity in the District. Under his helm, Dr. Ross guided the District through some tough times, which included declining student enrollment, nine school closures and other budgetary issues. Upon his retirement in 1990, Dr. Ross left behind a financially stable school district and a financial agreement with the Irvine Company to fund new schools (Tustin Ranch and parts of Irvine) that was the envy of other school districts.

Dr. Ross continued his career at the University of Southern California as an Assistant Dean of Education for eight years until his final retirement in 1999.

Through all the challenges and successes, Dr. Ross remained strong and steady with a focus on student achievement and academic excellence. He always believed in “surrounding yourself with quality people and liking your job.” His favorite motto was “be prepared.”

Prior to joining TUSD, Dr. Ross served as superintendent of the Norwalk-La Mirada Unified School District in Los Angeles County, and principal of Villa Park High School and McPherson Junior High School in Orange. He was also an assistant principal at El Modena High School.

Before his administrative experience, Dr. Ross was a teacher of biology, science and physical education, as well as a football coach at Polytechnic High School in Long Beach; and a biology teacher, P.E. instructor and athletic coach at Arlington and Pawnee high schools in Illinois.

Dr. Ross received his commission as an ensign in the U.S. Navy in 1953 and served as an engineering officer on the USS LSM 448 and maintenance officer at the U.S. Naval Magazine in Guam. He returned to inactive duty in 1955 with the rank of Lt. (j.g.).

Dr. Ross and his wife, Gloria, have lived in North Tustin for 56 years. During the 1980s, he served as president of the Tustin Chamber of Commerce and Tustin-Santa Ana Rotary Club.Â Dr. Ross was named Tustin Area Man of the Year by the chamber in 1984 for his dedication and valuable contributions to public education and the Tustin Unified community.

During his retirement, Dr. Ross enjoyed playing golf and spending time with his grandchildren

Cards and letters can be sent to the TUSD Communications Office at the District Administration Center, 300 South C Street, Tustin, CA 92780, and will be forwarded to the family.

Our hearts and thoughts go out to his family. He will be truly missed.

Director of Communications and Public Information