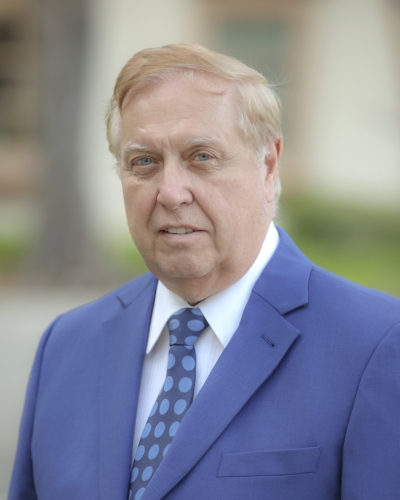 Rick is that rare combination: a brilliant, self-made man and local community volunteer. Having excelled in math and science at West Virginia State University, Rick received his Ph.D. in Physics from Michigan State University before coming to California in 1972 to work for Rockwell International and then Ford Aerospace. Following that he became first a professor (1992) and then dean (1994) at the University of California, Irvine. Retired since 2012, Rick is a full-time volunteer, devoting his time and leadership talents as president of Tustin Community Foundation; board member of Tustin Chamber of Commerce and Tustin Area Historical Society; president of The Legacy Foundation; president of Foothill Communities Foundation; president of FCA Charitable Foundation; president of North Tustin Political Action Committee; and committee member of TUSD Citizens Oversight Committee for Measure S. In addition, Rick has organized a government-community alliance to plant and maintain vines along Irvine Boulevard at Red Hill Avenue, initiated an extension of the Esplanade Trail, plans “Meet the Candidates” forums, and is active on the FCA Fire Safety Council. He built a winery in 2014 and provides wine (his label is Red Hill Winery) at no cost to Tustin nonprofit organizations for their fundraisers. Rick is also founder of the Southern California Jazz and Wine Festival. Rick and his wife Leigh have two married daughters, Brett and Sarah, and four grandchildren.